We are currently maintaining 580 pages (109 articles).

Please feel free to contribute by creating new articles or expanding existing ones.

Join the fight for The Frontier in this fast and fluid real-time strategy game. Combine towering Titans and agile Pilots to build an unstoppable force.

Put your skills to the test as you assemble the ultimate deck of Pilots and Titans paired into heroic duos. Collect and upgrade dozens of cards including tactical Burn Cards providing powerful battlefield support. Strategize your way to victory over enemy forces in epic PvP battles and compete for glory and rewards on the leaderboards.

Combine and conquer. Unite and destroy. And lead your forces to victory in The Frontier War.

News and Updates
10/26/17 Our big October update is now live with tons of new features and improvements! Join us tomorrow (Friday) on http://www.Twitch.tv/ParticleCity from 12:00 p.m. - 2:00 p.m. PDT to check out the new content and battle the devs. 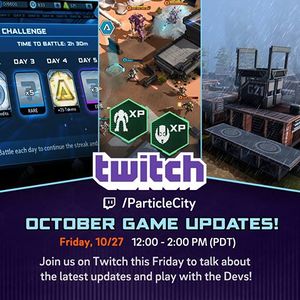 Help Wiki
General Help
Getting Started
Editing pages
New pages
Moving pages
Basic images
Links
Community
Register
How to help
To write a new article, just enter the article title in the box below or in the search box at the top of the page.